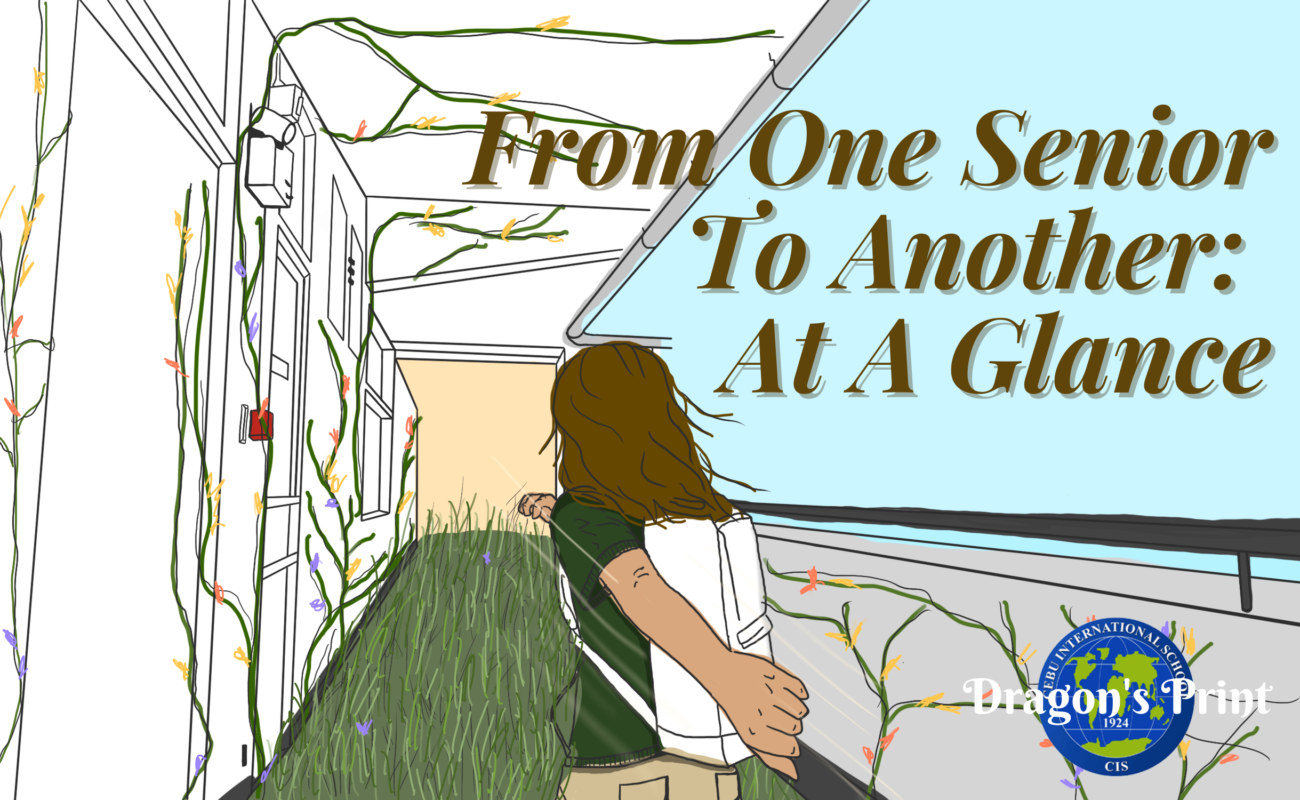 From One Senior to Another: At A Glance

I wore a tight shirt and had tighter nerves. I had to take the long route on the first day of school, Lord Byron stuck between a notebook and a textbook in my bag. I arrived bearing sweat and exertion, though it was wiped away in an instant.

You were bright and cheery, bearing a smile that reached higher than your petite frame. I thought you were a year below me. You were named Isabel, but you told me to call you “Trina”.

I was guided through grey and green hallways that would soon become like home; we passed through glass doors painted with portraits and into the school library. It was air-conditioned. Thank God.

We were told to introduce ourselves. For all the words I had to write there were none for me to say, but you turned to me and said, “I’m Louise, I came from Korea,” and I learned that there were distinct melodies beneath your fingertips, empathy in the straight cut of your short black hair.

“You used to be classmates!” is how I was introduced to you next. You were tall and wide, somehow still gangly despite this, and you owned a smile to rival the length of the horizon.

“Stuart, right?” I asked, timid, then you shook my hand and I felt I was going to be okay.

I remember your arms around me, how soft you felt. I remember thinking about how I was never hugged like this before—like I was welcomed. “Let’s go eat something,” you said. The people around us laughed, and maybe they told you, “Okay Emily, you pay,” but I already felt full.

You sat with me during lunch, and you bent over, looking at me with such curiosity in your gaze. “Hey, our names almost match. Alexandria—” you pointed at me, then at yourself, “Alessandro.”

“No one calls me Alexandria,” I joked, then you followed up with: “Do you read Sherlock Holmes?” You lifted volume one up in your hands. I had the same copy at home, sitting next to volume two.

“It takes him really long to finish it,” you interjected, smirking, light glinting off your glasses the way they do in TV shows, “He just likes to show people that he reads Sherlock Holmes.”

“Zoe!” was the subsequent battle cry.

The girls sitting with us burst into laughter at the same time, but when I looked, they were scrolling through their phones. Later, I’d come to see these screens for myself, and I’d see you on it under the ISAC name. I didn’t know you played.

“Go Romana!” your friends would cheer, the lunch tables turning into a stadium, and I’d watch as you ran across the screen, your determination clear despite the pixelated view.

After that, I saw you in pictures of the aftermath: hair side swept, a quirk to the corner of your mouth, praise surrounding the name “Yoji” in subsequent messages. You were the grown-up version of the boy who used to sit in front of me in junior high; you were someone I shouldn’t have recognized, but somehow still could.

I vaguely registered you as we participated in a service project. “Amanda?” I guessed, because there were faces whose names I had yet to place.

You grinned in confirmation, though your lips were tucked behind the strands of your hair. You always carried yourself with hidden grace, your footsteps light, your speech belying eloquence. You were quiet—you held a quiet strength.

“Sophie, your wallpaper’s so pretty,” I commented as I sat next to you one morning. On your screen, there was a picture of wildflowers, palm leaves, something tropical and exotic, quite like you. We never had many words to trade, but there was comfort in our silence, and you were the sunrise in that way: always constant, always missed. Never forgotten.

There were people of all adjectives around me; some who walked past me in the hallway like satellites, others who I could only steal glimpses of. Every day, I walked past ochre skirts and people littered across the hallways, waiting for the doors to open, catching a few more winks of sleep.

I’d see you every Physics class, and you lent me your book sometime in the first week. You were direct, intelligent, and the word “Kim” transformed itself into a pillar in my mind: someone stable in the midst of a high entropy class, where Joeven would parry Ikaia with a wooden ruler and recite lines from “Star Wars: Revenge of the Sith” merrily and without fault.

You were there for me instantly when I transferred into a harder class. “Math HL is like Mathletes but harder,” you advised, right off the bat, honesty and good humor shining in your expression.

“Really?” I answered, because I was never in Mathletes before. “Thanks, Miggy!” It was a comfortable adjustment. I liked sitting with you, a familiar face, a useful source of assistance when I was too embarrassed to ask the teacher myself.

“Justin, could you help me?” I asked you weeks before October, hoping to try something new with the people around me. “I need help preparing for a performance.”

“You got it,” you said, reliable and relaxed, and through you I was surrounded by talented people.

We’d scheduled practice times. I stood in front of your house, tinted green, and I sat next to you as we waited for the others. “Caitlin, what do you want to be? Where do you want to go?”

You answered me with stark sincerity, something eager and undaunted brimming in the heat of your gaze. I was moved by your persistence. I was inspired by it.

You sat by the stairs, like Rodin’s The Thinker. Knuckles to your chin, your keen gaze transparent and reflective, all at once. “Do you want to be my TOK partner?” you asked, and I stopped, startled.

I knew I wanted to. There’d be no regret.

Before I could say “yes” your friend answered the question for me. “Denise and Venise,” they laughed, “What a pair.”

In class, I passed you my answers and wondered, “James, if you were an animal, what would you be?”

“A microorganism,” you said, after some thought. “Floating in outer space or living in the Marianas trench. I want to see what’s out there, or what’s at the bottom.”

“Miggs, I have a joke and I don’t know who to tell,” I texted you—a long-shot in the celebration of the New Year. “If you start 2020 lying down in bed, you’ll be real. If you start 2020 standing up, you’re imaginary.”

“Real?” you replied, confused. “Ohh,” you followed, and I laughed. You proceeded to give me a TOK challenge as a goal (or should I say price?) of correspondence, and for the first time, I felt I could be genuine.

“Look! I got this for you,” you said brightly, lifting a sticker of Inosuke Hashibira. It was just the start of Chemistry class, and you were already so energetic. I felt sleep leave my eyes, washed away by the excitement in your gaze.

“Thank you, Reina,” I said quietly, too surprised—too fresh from sleep—to give you a better reply, but you smiled like you understood. I tucked Inosuke into the cover of my calculator. He’s still there.

“You can sing!” you insisted, respect in the way you regarded me. I watched you audition for the school play, oozing confidence, your voice ringing pleasantly in my ears.

“No, you, Masako,” I whispered, as you took the stage by storm.

Backstage, I watched you shine. You looked beautiful in the nighttime hues, your pink dress catching the light in all the right ways, the sparkle of the spotlight in your eyes betraying your allure. “KC looks great,” said the girl next to me, and I disagreed.

Confetti danced in the air and you were stuck in a pose that amused me more than it should have. You stood erect like a bright blue pistil and bowed like the bend of a petal, then you sauntered off the stage like you were walking on the clouds.

I watched glitter flutter off your form. It was magic.

“Congratulations, Jhon,” I bid quietly, the way a child would as they gazed upon a star.

I pushed your chair in English class while you were on it. “Are you secretly strong or something?” You sounded incredulous, like you were on the brink of being awed, or lingering on the cusp of something exciting. That was how you always were.

“No, Ariane,” I sighed, because my arms did in fact feel quite heavy. I wasn’t hiding superstrength. I’m not Superman.

But you were, to me. You walked next to me for every class we had together, and I felt like the Clark Kent to your hero. You guided me. You said yes to every idea I had, and I chased after you for every one of yours. Eventually, we weren’t superheroes and alter egos. We were just Dana and Venise, and we were—

“Sisters,” you said in congratulations, as I held your heart in my hands, “Thank you for being my sister.”

And I knew then that no matter how far I’ll walk, there are threads attached to the tips of my fingers, my toes, the very edges of my soul, and they all lead back to this place: the green, green grass of home, the garden that bore such beautiful, vibrant, and accomplished flowers.

You are the smiles that win, the tints that glow, and you are days in goodness spent. I cherished every moment, every small, seemingly insignificant moment, because everything I saw only spoke of how lucky I was to be a flower in your midst.

No matter the distance and time, and no matter how much you’ll grow and keep on growing, your resplendence is unmistakable.

And I’ll know it’s you—I’ll always know that it’s you—even at a glance. 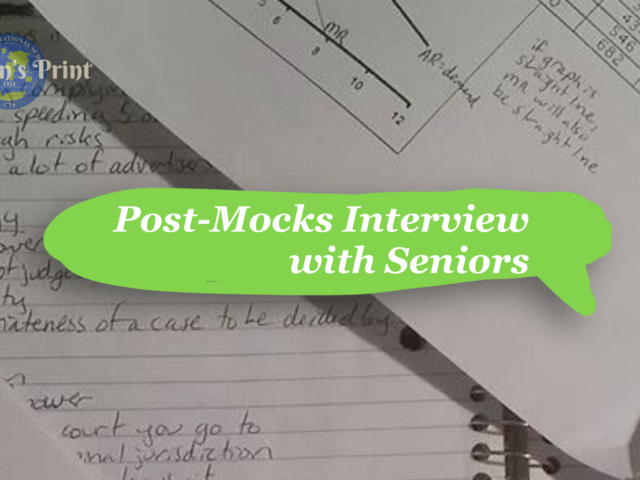 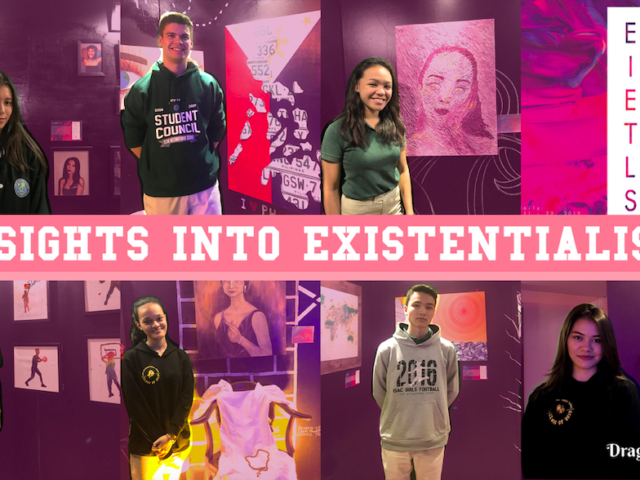 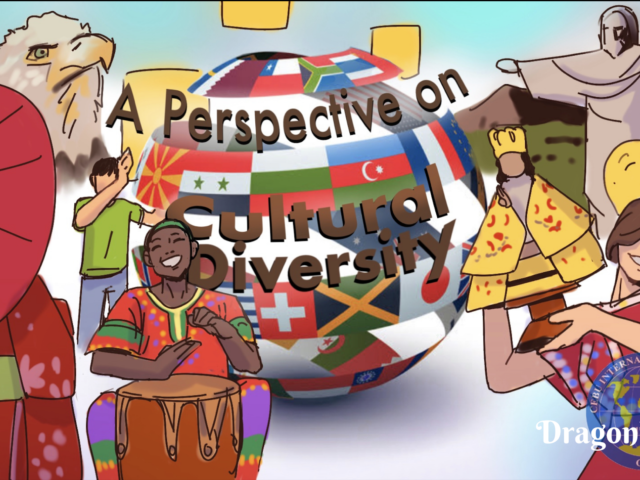 A Perspective on Cultural Diversity